"America is passionate about business, abashed about sex. Passions and abashment can be inadvertently hilarious, and that makes Grindhouse one engrossing belly laugh from cover to cover." —MovieMaker "Breezy, authoritative, gaudily illustrated." —Richard Corliss, TIME

"A fascinating, though at times grotesque look at a world that everyone knows about, but one that is rarely acknowledged." —Austin Chronicle 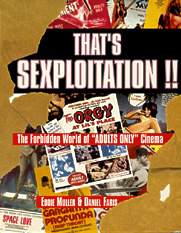 GRINDHOUSE: The Forbidden World of Adults Only Cinema

It's Shocking! It's Sinful! It's the Movies Hollywood Didn't Want You to See!

From the 1920s through the 1970s, America's most fearless entrepreneurs created thousands of "adults only" features— exploitation films that promised "Sinsational!" treatments of the day's hottest topics. These films played red light district theaters and roadshows for almost half a century, until hardcore pornography and the advent of VCRs rang the death knell for this distinctive form of "art."

Grindhouse traces the ribald history of these "adults only" films, down Poverty Row through the Scandinavian Invasion, past the nudie-cuites, and into the swinging days of free love. Along the way we get the most sordid, sleazy, and shameless cinema imaginable-Vice Rackets! Narcotics! Nazis! Nudists! Cults! Wrestling Women! And So Much More Than You Can Ever Imagine!

Adding yet more color to this history of blue movies are revealing portraits of the artists and auteurs behind the films, including Dwain Esper, Kroger Babb, Russ Meyer, Doris Wishman, David Friedman, Radley Metzger, and the Mitchell Brothers.

Grindhouse was named one of the 25 best art books of 1997 by legendary Village Voice art critic Guy Trebay. Dig his evocative capsule critique:

"Back when the cuddle toy of Times Square was Kitten Natividad and not Minnie Mouse, New York was a wonderland for the depraved. The austerities of a body-hating Puritan culture have always necessitated good sources for smut—hence the grindhouse or, more prosaically, the adults-only theater. Let the mullahs of Islam and Gracie Mansion rail, there will remain a place in our hearts (and elsewhere) for Hotel Confidential, Olga's House of Shame, The Degenerates, Deep Throat and Come Ride the Wild Pink Horse. Auteurs like Russ Meyer and supercheesy Harry H. Novak will still be born.

"Sloppy, tossed-together, and deliriously improvisational, this book still frankly celebrates what the introduction calls 'an alternate country co-existing within the boundaries of the official America.' Coexistence isn't what it used to be as grindhouses are legislated away. All the more reason then to make this book a holiday gift for that lonely friend who celebrates Christmas in the flickering light of a VCR, besides a tinseled, half-dead ficus."

SAYS EDDIE "This one is now sadly out-of-print, but it's crying for a revised edition. It was born out of a dumpster excavation behind an old grindhouse in downtown San Francisco, which unearthed the rare sexploitation material from the 1930s that appeared in the book. How perfect. The book was really one of the first of a wave of volumes exploring America's "shadow cinema," and it also served as the inspiration for the film Mau Mau Sex Sex, which I co-produced and co-wrote with Ted Bonnitt."